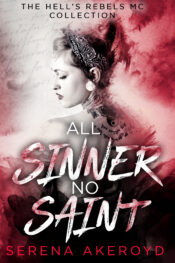 I’m aptly named.
I’m Lucifer in the flesh: Lucie to those who love me, B*tch to those who loathe me.
I have plenty of enemies, most of them in the clubhouse where I was raised.
But I’m tired of being an outsider, tired of being on the outside looking in.
I want to go home.
And home?
Isn’t a place.
It’s with four men. Four bikers who own my heart and soul, and have done since I was a kid.
Even if they betrayed me.
But I’ll forgive them.
I will.
Only after I make them pay for their mistakes…

My family has enemies. Enemies that made us pay through my suffering.
All these years later, after being kidnapped, I can only sleep in the arms of a biker my daddies would kill if they knew how he shielded me.
And he isn’t the only one.
Saint? Keys? Ink?
They’re more than just bikers, more than just brothers.
They’re my sanity.
I love them.
And they love me.
Now it’s time for them to realize we’re made to be together…

The collection contains an EXCLUSIVE scene that will never be released anywhere else.

The Hell’s Rebel Collection consists of titles that were originally published as THEIR SINNER and THEIR SAINT. You can now enjoy both mother and daughter’s books in the one collection.