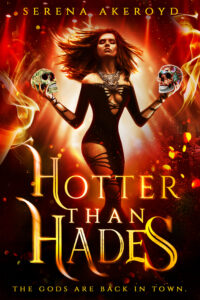 The Gods Are Back in Town.

Well, to be precise, they never left.

Just because people stopped believing in them, didn't make them disappear, and Hades, Apollo, Ares, Poseidon, and Zeus are all as about town as they ever were. They just have different names.

Ziel Dearil is the God of the dead and the King of the Underworld. With his guardians at his side, demi-god Orpheus, and hero Icarus, he's been ruling his rather boring realm with an iron fist since time began.

Then, everything changes when Cressida Jonas walks into their world.

When Hades informs the multi platinum-selling, multi award-winning singer that she's his wife, any normal woman might have run screaming for the hills. Cressida, on the other hand, sees this as an opportunity to get revenge on the man who wronged her eighteen months ago.

Falling for three guys was never a part of the program, just vengeance, but of course, the Fates have a way of messing with the best laid plans.

See what they have in store for Cressida, Hades, Icarus, and Orpheus in HOTTER THAN HADES! 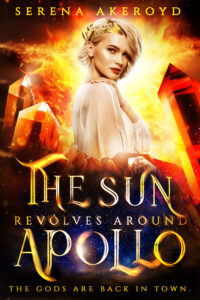 Being alive has never been so exhilarating, or, as Ella is finding out, more dangerous...

A few months ago, Ella was a ghost.
D-E-D.
Hades, the God of the Underworld, brought her back to life as a boon to his beloved wife, Cressy, but things kinda unraveled when Ella met Zeus. Saying it all went Pete Tong is just an understatement.
Now, she's back on Earth in a body, but it isn't hers. She has a name too, and it isn't Ella.
What happens when a soul takes over another's body?
Well, it starts to look like demon possession.
Fearing her 'mom' will bring in an exorcist, Ella agrees to stay in a rehab center where she accidentally meets Achilles and Pollux, guardians of the god Apollo. They're busy getting it on, and Ella is quite happy to hang around for the show. Until they realize she's snooping, of course.
Face-palm or what?
But the meeting is a revelation, and through them, she meets Castor and the god himself: Apollo.
As the second in Zeus' baby-making scheme, Ella is Apollo's bride. But her lineage is sired by Helios, the God who brings the sun out after a long night, and Apollo? He powers the sun itself.
Oops.
When these two get together, more than sparks fly, the sun itself starts to storm.
With the world unexpectedly in peril, Ella and her four husbands have to right the wrong they inadvertently committed when they danced the horizontal tango.
Can they save the world in time?